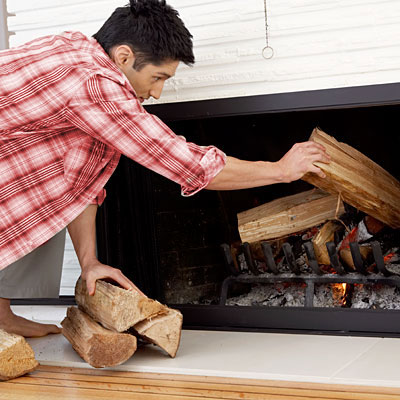 How to heat with wood

Use only raw chemical natural logs, as well as wooden briquettes without adhesive glues.

It is important the logs to be dry. Dry are called those logs, which have stayed in a dry and an airy place at least for 2 years.

Why humid logs shouldn’t be used?

Preparation of the logs

The logs are kept chopped and arranged. After their seasoning in summer under the influence of the sunbeams and the warm air their dampness must fall under 20%. A dry piece of wood is cracked in his edges. The thickness of the logs must be between 5 and 15 m.

The best way for storage, in which the logs are aired and dry quickly is their arrangement in layers. 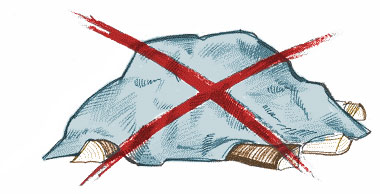 Never cover the wood with nylon. That doesn’t allow it to dry. If you keep it in a closed room, then it must be well ventilated.

The purpose of kindling is to warm the walls of the firebox, pipes and the chimney up, so that conditions of blazing and brisk fire to be created, without being necessary to open the door several times for its preparing it up (its final preparation). 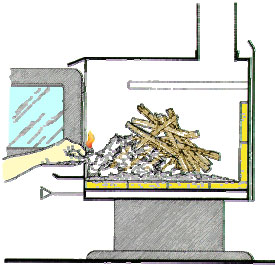 The aim is to kindle the fireplace with one stick of matches, without unnecessary fuss and repeatedly adding of paper and kindlings.

This is a complex process which can be divided into three stages.

Evaporation of the water.

The water occupies till a half of the weight of the fresh cut logs. After proper seasoning, the weight contents of water decreases to 20 per cent. When this water is heated in the firebox, it evaporates absorbing a part of the heat energy released when burning. The more humid the logs are, the more energy is wasted. Therefore the damp logs fizzes (sizzles) and crackle, while the dry ones kindle and burn easily.

The smoke represents a cloud of inflammable gases. Their kindling occurs with a sufficiently high temperature and the presence of air maintaining the burning. The gases burn with bright flames. When no kindling occurs, the smoke either condenses on the pipes and the chimney in a shape of tarry precipitations or it is thrown away, polluting the environment. The non-kindled smoke carries away the bigger part of the energy containing in the logs without any use.

Burning of the embers.

After the flame develops and the water and the tarry substances evaporate from the logs, remain the embers. Embers contain 100% carbon and burn with small red flames. Embers are a good fuel and burn easily if sufficient air is added.
From the whole heat energy, containing in the logs, approximately a half is released when the gases burn and a half-when the embers burn.

In fact these three stages go simultaneously – on the ends of the logs can glow red, while from their pith water still evaporates. The condition of effective burning effective burning is the water shall (to) evaporate quickly and the gases to burn with a bright flame, before to leave the firebox.

Don’t expect the heat radiated by the fire to be permanent in time. Logs burn best in cycles. Cycle is the time from the kindling of the logs arranges on the embers till their transformation in a new layer of embers. Each cycle can ensure heating for some hours depending on how many logs and how they are refueled.

Never add only one or two logs. Their bigger number is necessary to form a layer of embers, which keeps the heat and maintains the burning.

Finely chopped logs, flung about crosswise, burn more quickly, because the s the capability to reach all the pieces simultaneously. Such arrangement is suitable when an intensively releasing heat is necessary.
Scrape the embers up to the front part of the grate and put on them at least 3 logs – freely crossed. Open the opening for the primary air till receiving bright and blazing flames. After that the influx of air it can be decreased, but not so much so that the flames go out.

The bigger pieces arranged parallel and tight, burn more slowly and are suitable when an uninterrupted continuous fire is necessary.
To achieve a continuous stable fire, gather the embers on the grate and put on it huger logs compactly. The compact arrangement of the logs averts penetration of air and flames between them and keeps the interior of the pile for later
burning. Open completely the primary air. When the logs most outside kindle, decrease the air to achieve the intensity for burning desired by you.

Have you ever wished to burn refuse from the household in your fireplace?
Have you thought that they disappear so without any trace? Burning of the rubbish leads to unpredictable consequences, because in contrast to the dry logs, the rubbish contains various substances, which react when they burn together. For example, the household refuse contain various coloured papers and plastics. When you burn them up, you don’t destroy them, but only the kind of the poisons thrown away is changed.

One of the on burning of the papers and the plastics is dioxin – a very poisonous chemical, which doesn’t decompose and get into the tissues of animals and people.

All the produced fireplaces and stoves are designed and tested to work with dry wood without glues and paints. It is allowed an ordinary newspaper to be used only for the initial kindling.

Burning of logs and ecological balance in nature 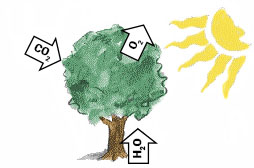 Plants are capable of receiving and to conserve chemically the solar energy. The substances necessary for their growth are carbon dioxide, which is accepted from the atmosphere through the leaves and the water, absorbed by the soil through the roots. Under the influence of sun beams the carbon dioxide is decomposed into carbon and oxygen. The water sucked out through the roots on its part decomposes into hydrogen and oxygen. The hydrogen and the oxygen are used for the growth of the tree, and the oxygen is released in the atmosphere.
Burning of the logs by no means disturbs the ecological balance in nature
On right burning of the wood no more CO2 is released, form this, which the tree has accepted from the atmosphere on its growth. If the logs are left to rot, they would give off the same quantity of CO2. For this reason burning of the logs, in contrast to the fossil fuels, has no relation to the greenhouse effect.

The oil, the natural gas and the stone coal are fossil coals and on their burning the carbon accumulated in the bowels of the earth enters the atmosphere. The increased concentration of carbon dioxide is connected with the global warming and the change in the climate, which are observed in the last years.
Using logs means less burnt fossil fuels, less concentration of CO2 in the atmosphere and cleaner environment.